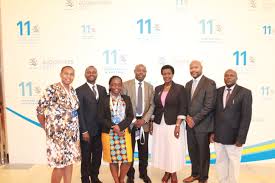 The Republic of Uganda and the Democratic Republic of  Congo (DRC) held a  bilateral meeting on the promotion of cross border trade  from 5-8 April 2018 at the level of technical experts.

The meeting followed a decision of the Ministers in charge of Trade for Uganda and the Democratic Republic of Congo held on the side-lines  of the Africa Continental Free Trade Area (AfCFTA) meeting in Kigali in March 2018 that the countries should hold a bilateral meeting in Uganda in April 2018.

The meeting was held under the auspices of the Great Lakes Trade Facilitation (GLTF) Project which the two countries are implementing with funds from the World Bank.

The meeting was convened to consider promotion of cross border trade, trade facilitation issues relating to customs, immigration, and elimination of Non-tariff barriers and implementation of Simplified Trade Regime (STR). The output of the meeting was to draw a framework for addressing challenges faced by cross border traders of the two sister countries.

Uganda’s delegation was led by Mr. Silver Ojakol, the Commissioner for External Trade in the Ministry of Trade, Industry and Cooperatives of the Republic of Uganda along with H.E. James Mbahimba the Ugandan Ambassador to DRC and his Deputy Ambassador Brigadier Julius Chihandae.

The delegation from Democratic Republic of Congo was led by Mr Kwete Mikobi Floribert Director of External Trade.

The meeting drew participants from Ministries of Trade, trade facilitation institutions, the private sector, local governments/provinces from the two countries. The list of participants is attached as ANNEX 1.

During the visit to the border, the delegates established that most of the challenges were cross cutting between the two countries. They established areas that should be improved in order to enhance cross border trade.

The meeting considered and adopted the agenda as follows:

The official opening ceremony of the technical meeting was held on 6th April 2018 at the Magherita Hotel, Kasese, Uganda.

The representative of the Chairman Kasese District, Mr Masereka Eli Mabwana welcomed the Delegates to the District and emphasized the need for harmony and improved trade between the two countries.

Opening remarks by Head of Delegation from Uganda

On behalf of the Permanent Secretary, Mr. Silver Ojakol, the Commissioner External Trade, welcomed participants to the meeting and emphasized the need for the two countries to harmonise implementation of the COMESA – FTA, Tripartite FTA, African Continental Free Trade Area (AfCFTA) to benefit the people of both countries.

He informed the meeting that the Ministers would be launching the Simplified Trade Regime (STR) based on the list the two countries agreed on in 2015. He concluded by appreciating the DRC delegation for honouring Uganda’s invitation and wished the meeting fruitful deliberations.

The head of delegation of the Republic of Congo Mr. Kwete Mikobi Floribert – Director of External Trade in DRC thanked the Ugandan Government for hosting the meeting and emphasized that it is indeed necessary to eliminate trade barriers to boost cross border trade between the two countries.

He noted that we are both members of COMESA and the two countries participated in the negotiations and their respective Heads of Governments signed the AfCFTA and this framework as a basis for promotion of Bilateral Trade.

He stated that the people of DRC and Uganda are a family and therefore this meeting should use the opportunity to enhance the business between the two countries.

He further pointed out that Trade and business development should contribute to economic development and poverty reduction.

He thanked the host for the warm reception that was accorded the Congolese delegation and welcomed the good working atmosphere. He wished the meeting a fruitful deliberations.

Lt. Col. James Mwesigye thanked the organizers for choosing Kasese and guaranteed the Delegates security as they discussed areas of boosting free and safe trade in the two countries.

He rhetorically inquired how the two parties could improve trade. He notified the meeting that we need peace, security, infrastructure and elimination of corruption among others.

COUNTRY PRESENTATIONS ON ISSUES AFFECTING TRADE BETWEEN THE TWO COUNTRIES

Presentation of issues identified by Uganda

The Republic of Uganda presented on issues identified which affect trade between the two countries. In the presentation, it was noted that  issues affecting Trade between the two countries are in the areas of Customs, Immigration, Infrastructural and process related  challenges; in addition to the unnecessary delays, multiple checks, multiple taxation, civil aviation, un-harmonised border operations, among others.

The meeting noted that a number of issues identified can be classified as Non-Tariff Barriers. The meeting discussed and made possible solutions on the basis of which the two countries can cooperate.

Development of the MOU to establish a framework for cooperation

The meeting drafted an MOU to guide cooperation between the two countries in addressing the challenges affecting their trade. The key areas of cooperation are:

The Joint Trade Committee recommended to the Ministers to consider, adopt and sign the MoU.

The meeting developed a Joint Communique on the outcomes of the meeting for consideration and adoption by the Ministers. The Draft communique is attached herein as ANNEX 6.

The Joint Trade Committee recommends to Ministers to consider, adopt and sign the Joint Communique.

The closing remarks were made by the representative of the Secretary General COMESA, Mr Tasara Muzorori, Senior Trade Officer.

Mr. Muzorori appreciated the meeting for the good deliberations and outcome of the meeting.

He emphasised the need to facilitate the trade between the two countries and pledged to support such initiatives, especially the STR.

He noted that the STR was designed by COMESA in consultation with the Cross border trading communities and the concept is being adopted as a benchmark.

He appreciated the efforts of the countries to improve trade within the COMESA region. He finally thanked the meeting for the time they dedicated and wished the delegates a safe journey home.