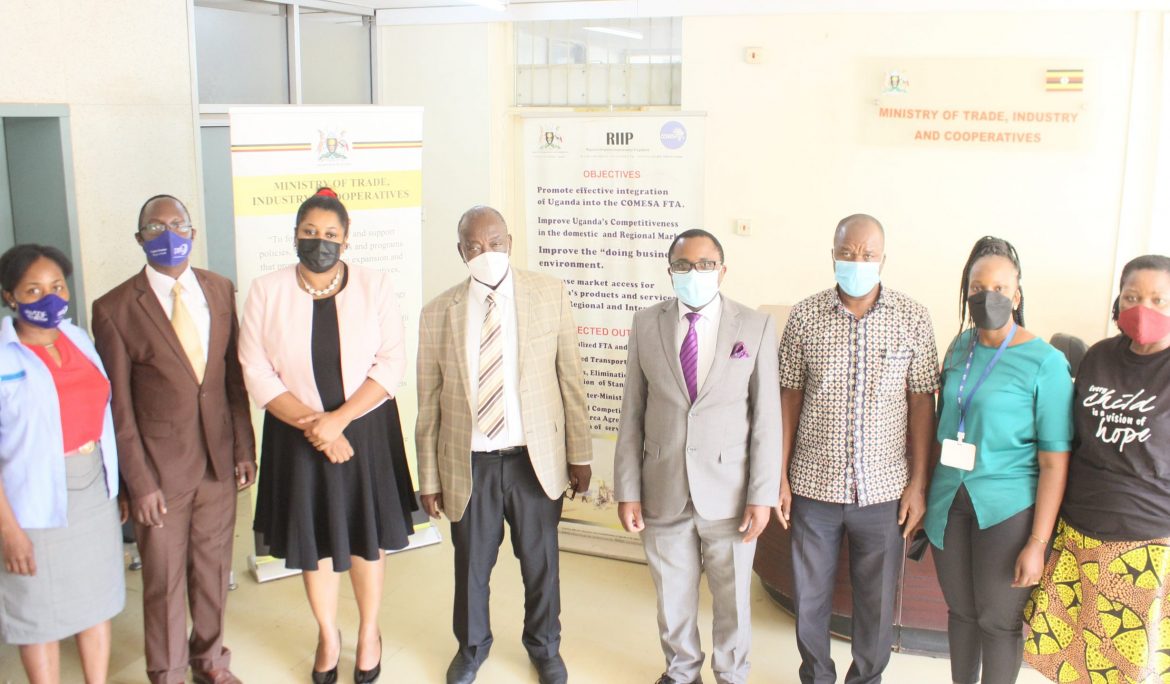 The Minister for Trade, Industry and Cooperatives, Francis Mwebesa has said he will work with the Ministry of Finance, Planning and Economic Development and National Planning Authority to strengthen the Private Sector Foundation Uganda (PSFU). He noted that since Uganda is a private sector led economy, then it is critical in driving Uganda to a middle income status in line with Uganda Vision 2040 and the NRM Manifesto. Mr. Mwebesa said his key agenda as the Minister for Trade, Industry and Cooperatives is to build a middle income class of traders and industrialists.

Hon. Mwebesa made the remarks on Friday during a meeting with the Board and Management of PSFU at the Ministry boardroom.

The Minister also promised to support some of the Private Sector projects through Uganda Development Corporation (UDC), the development and investment arm of Government.

He, however, called for a strong Chamber of Commerce and Industry with a strong negotiating power. He said he would commission a study on how this can be achieved.

The PSFU team through the Ag.  Executive Director Mr. Francis Kisirinya presented a 4-point industrialisation and import substitution agenda to the Minister, where the Foundation is seeking Government intervention in order to sustainably create more jobs, wealth and help the country attain macroeconomic stability.

The issues presented include; putting in place a policy to support startup businesses, especially Micro, Small and Medium Enterprises (MSMEs). He appealed to the Trade Ministry to work with the PSFU to review the MSMEs Policy to include an element of startups to support the growth of MSMEs saying currently, businesses have to go to banks to get startup loans yet banks demand for collateral security, putting them at a disadvantage.

Mr. Kisirinya also noted the issue of unfair competition in trade and manufacturing citing an example of some companies registered for a particular business but diversifying into other sectors. He particularly pointed out supermarkets that have ventured into bakeries, hence, outcompeting confectionaries that should be selling their products to the supermarkets. He asked the Minister to expedite the process of enacting the National Competition Bill into law to regulate unfair competition in the trade and manufacturing industry.

The PSFU Ag. Executive Director further highlighted the high cost of doing business in Uganda such as high electricity tariffs which is still as high as 10USD cents KWH for MSMEs, high lending rates and high taxation policy which is hampering the growth of businesses especially MSMEs. He said PSFU wants to work with the Trade Ministry on policies that can reduce the cost of doing business in the country.

Mr. Kisirinya also appealed to the Minister to help address the issue of limited access to markets for Ugandan products. He noted that even though Uganda is a surplus country it is not automatic that the market is readily available due to factors such as Non-Tariff Barriers, citing the case of the East African Community (EAC) market. He appealed to the Ministry to work with the PSFU to expand markets for Ugandan traders by taking advantage of new market opportunities like the African Continental Free Trade Area (AfCFTA).

The PSFU Board Chairman, Hon. Dr. Elly Karuhanga commended H.E. President Yoweri Museveni for appointing an entrepreneur to the docket of Minister for Trade, Industry and Cooperatives.

According to the third National Development Plan (NDP3), the private sector in Uganda generates 77 per cent of formal jobs, contributes 80 percent of Gross Domestic Product (GDP), funds 60 percent of all investments and provides more than 80 percent of government domestic revenues.