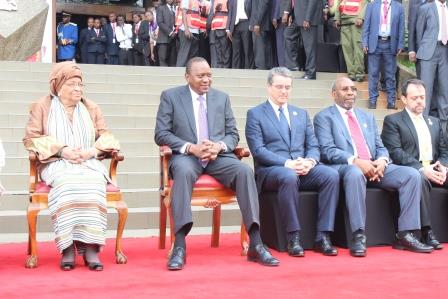 The donor community in the World Trade Organization (WTO) has reaffirmed their commitment to supporting the Least Developed Countries (LDCs) in the WTO including Uganda to fully integrate in to the global trading system and fight poverty through aid to trade. This was during the Pledging Conference for phase 11 of the Enhanced Integrated Framework (EIF) that preceded the Tenth WTO Ministerial Conference that is opening in Nairobi, Kenya on Tuesday 15th, 2015 at Kenya International Conference Center.

Ministers from 161 countries are meeting again for the 10 time to discuss the future of the Doha Round of the World Trade Organization (WTO) that was launched in 2001. For the first time, Africa is hosting the WTO Ministerial Conference, which is the top most decision making body of the WTO. 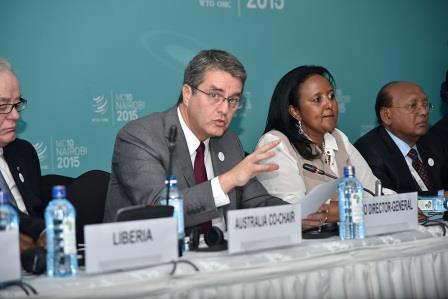 The Enhanced Integrated Framework (EIF) is a multi-donor trust fund promoted by the WTO, which provides financial and technical support to build trade capacity in all 48 LDCs including Uganda. It is a unique global partnership dedicating to support the LDCs to use trade as a tool for economic growth and poverty reduction through job and income opportunities.

While opening the EIF Pledging Conference for phase two, the Director General of the WTO Roberto Azevedo said WTO is committed to the EIF in a bid to increase the share of LDC trade. He said indeed since the inception of the EIF in 1997, LDCs’ share of global trade has increased. He urged the contributing donor members to make pledges and replenish the EIF Trust Fund, so as to implement and sustain the second phase of the programme.

The mandate of the EIF programme was extended for a seven year period starting in January 2016. Phase 11 will allow LDCs to build on the achievements attained in the first phase so as to make a difference in the lives of the poor people. The 7 year phase (2016 – 2022) requires between US$ 274m and US$ 320m to implement with emphasis on strengthening the role of trade to benefit the poor to reduce poverty, increasing productive capacity and presence in international markets and fully sustainable trade policy and institutional framework.

The money will be used to fund the development of Diagnostic Trade Integration Studies and Updates in 33 LDCs, 14 projects to support the integration of trade priorities into national development strategies and 79 catalytic sector support projects based on country identified priorities.

Norway was the biggest contributor pledging US$150m in the period 2016 – 2020. Making the pledge on behalf of the Norwegian Government, the State Secretary at the Ministry of Foreign Affairs, Morten Høglund said the EIF is an important instrument of development that needs to be supported.

The Executive Director of the EIF Ratnakr Adhikari thanked member countries that made the pledges to replenish the EIF Trust Fund said that investing in EIF is the best value for tax payers’ money for any country because what is good for LDCs is good for the rest of the world. Ratnakar urged other members to make pledges saying a lot still needs to be done.

Uganda is a beneficiary of the EIF and during the first phase, she was able to mainstream trade into national development plans, strengthening trade institutions and building capacity needed to roll out coordinated trade and development assistance.

This project has enabled the District Commercial Officers to improve on service delivery to the private sector. Business enterprises and cooperative societies have been provided with trade information, training and support to improve the operation of their businesses.

Trade Minister Amelia Kyambadde who represented Uganda during the EIF pledging Conference in Nairobi, Kenya said Uganda is looking forward to the implementation of the second phase of the Programme.

She said during this phase, the Ministry of Trade will ensure that the trade agenda is mainstreamed in the different sectors of the economy, and projects that address supply side constraints are developed and funded.