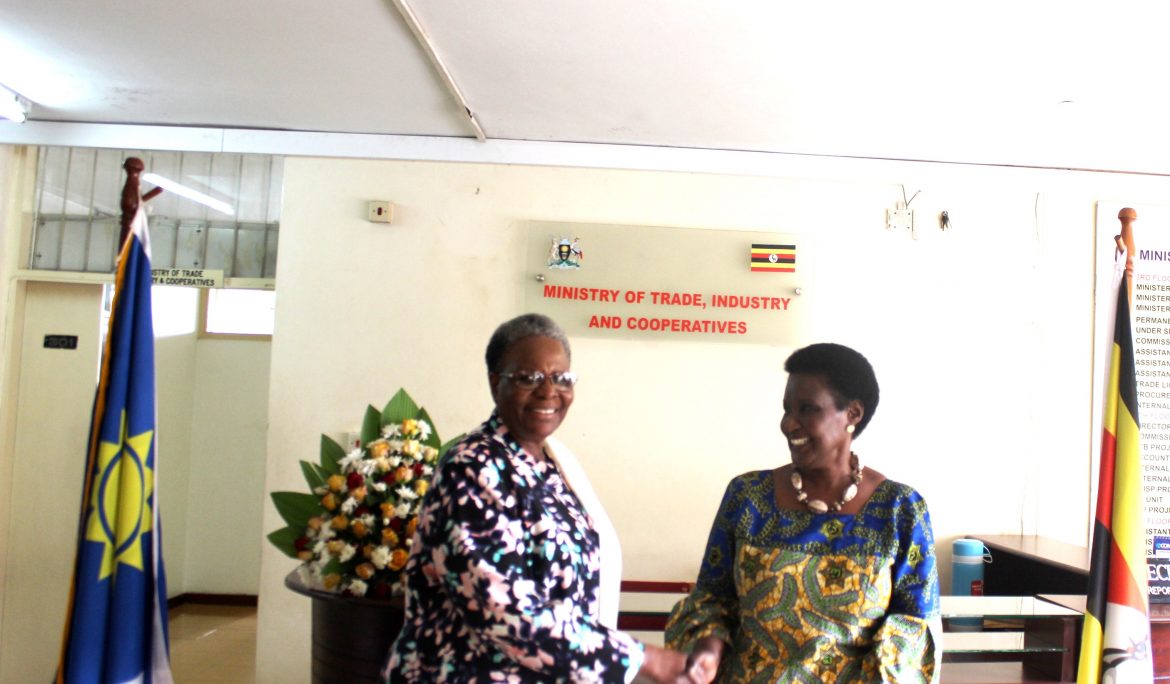 Uganda is privileged to host the Hon. Netumbo Nabdi-Ndaitwah Deputy Prime Minister and Minister of International Relations and Cooperation of the Republic of Nambia and vice President of the South West Africa People’s Organisation (SWAPO). She is leading a delegation of 11 persons on a four day visit with a focus on enhancing the bilateral relations between Uganda and Namibia. During her visit, she met H.E the President, the Prime Minister, Minister of Foreign Affairs and the Minister of Trade, Industry and Cooperatives.

The Republic of Namibia is an economy with a 2.5 million population, GDP Growth Rate averaged at 1.19 percent from 2004 until 2019 and member of the Southern Africa Development Community and Southern Africa Customs Union.

Uganda and Namibia have enjoyed cordial relations since the early 1990s. Trade between the two countries is governed under the World Trade Organization (WTO), the Tripartite and the Continental Free Trade Areas. However, trade between the two countries remains very minimal and skewed in favor of Namibia registering a deficit of USD 183,000 for Uganda as of 2018.   Statistics indicate that in 2018, Uganda exported only sesame oil seeds to Namibia valued at $27,000 USD and imported goods worth $210,000 USD which mainly included worn clothing, Machine tools for working metal and grapes.

The Minister of Trade, Hon. Amelia Kyambadde called on the Government of Namibia to strengthen trade relations through the various regional trade blocs and at individual country level. She indicated that Uganda was a potential investment area that the people of Namibia could exploit. Uganda’s priorities for trade and investment are focused on value addition in a number of sectors such as Agriculture, Information and Community Technology, Infrastructure- Transport /Logistics, Energy, Tourism among others. She indicated that Uganda is one of the fastest growing economies in Africa with a GDP growth rate averaged at 6.5% and in a strategic location within the region.

Hon. Netumbo Nabdi-Ndaitwah, Deputy Prime Minister of the Republic of Nambia applauded the Government of Uganda for cordial relations and re- emphasized the need to further harness regional value chains across the African continental free trade area. In a presentation made on promoting Namibia as an investment destination, she indicated that the Government of Namibia prioritizes investments in the fisheries sector and tourism among others.

In order to lessen the gap in the trade bilateral relations, the two Ministers agreed to explore developing an MoU on enhancing trade and investment; the need for infrastructure connectivity across the continent; cultural/education exchange programs.